Five years ago, the news about local bobcats was distressing. Twelve bobcats at Rancho San Antonio Open Space Preserve died from notoedric mange and dozens were reported sick. This disease is caused by mites infesting the skin of animals with compromised immune systems, making them weak and emaciated. The suffering of these bobcats was incredibly sad for preserve visitors, volunteers and staff. 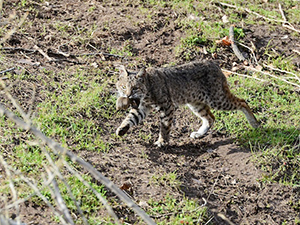 Our research discovered that commonly available rat poisons called second-generation anticoagulant rodenticides were linked to the bobcats’ illnesses. Predators like bobcats, hawks and owls eat hundreds of mice and rats a year. Poisoned rodents make easy prey and the bobcats eating them were becoming sick.
In response, Midpen staff educated preserve neighbors about the effects of rodenticides on wildlife and joined the ongoing effort to lobby the California State Legislature in prohibiting their use. In 2014, the legislature passed AB 2657 limiting access to second-generation anticoagulant rodenticides to individuals with pest control licenses. Midpen also implemented a new plant and animal pest management program in the preserves, using non-chemical techniques whenever possible to protect human and environmental health.

Today, we are receiving consistent reports of healthy bobcats at Rancho San Antonio Open Space Preserve. We remain cautiously optimistic that this trend will continue, but there is more work to be done. Some anticoagulant rodenticides are still readily available in California and are impacting wildlife statewide. You can help. Make your home less hospitable to rodents by patching holes in buildings, removing habitat such as dense ivy and cleaning up easy food sources including fallen fruit and pet food. When necessary, choose non-chemical methods such as snap and box traps to control rodent populations in your neighborhood. Finally, let us know about the bobcats and other wildlife you’re seeing by using the free iNaturalist app on your smart phone. Reports from open space preserve visitors play an important role in our work protecting local wildlife, including bringing Rancho San Antonio Open Space Preserve’s bobcats back to health.