Can You Put a Price Tag on Nature?

In recent years, a new kind of research has been taking place in open space: economics. Showing that nature is not only beautiful and enjoyable, but also economically beneficial, gives open space managers a new language for communicating why preserving natural lands is a cause worth funding. 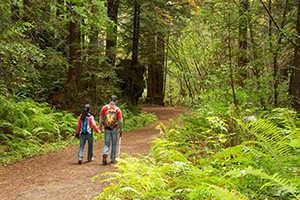 East Bay Regional Park District released a report this spring called “Quantifying our Quality of Life” estimating the annual contribution of their 120,000 acres of public open space to the local economy at $495 million. It’s the second installment of a similar report produced in 2000 and tallies the dollar-value of visitor fees, increased property values and reduced healthcare costs. It also takes into account passive services provided by nature and their related cost-savings. Known as ecosystem services, these include watersheds providing drinking water, baylands preventing flooding, forests sequestering carbon, and soils growing crops.

Santa Clara County Open Space Authority completed a similar study in 2014 called “Healthy Lands and Healthy Economies” ahead of their successful ballot initiative. The report estimates the annual value of their 16,000 acres of public open space at up to $386 billion. Santa Cruz County’s version of the report sets an annual economic value of up to $2.2 billion for the area’s “natural capital”.

While Midpen has not created such a study, those who voted to pass Measure AA last year proved open space is valued in our community, just as voters did a generation ago when they created Midpen in 1972. Then, as now, Midpen’s open space preserves remain free and open to the public 365 days a year. We are hard at work delivering the land preservation, restoration, and public access projects identified by the community as priorities for Measure AA funding. Thank you for valuing nature and the many ways it benefits us all physically, emotionally, economically and intrinsically.

Ultimately, economics is another measure to communicate the benefits for keeping open spaces viable into the future so they can continue the essential job of sustaining life. For all of our efforts to define its worth in dollars and cents, nature is truly priceless.