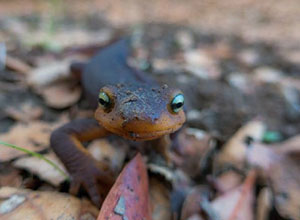 Many parts of the Bay Area are connected with spectacular, carefully engineered bridges that enhance commerce and the movement of people from home to work and back again. They make life better for us. But, in building these bridges and the highways that are often metaphors for progress, we inadvertently eliminated other bridges and highways that are far less obvious, but of great importance nonetheless. They are the ancient pathways followed by wildlife from time out of mind to move them through the landscape in search of food, shelter and mates. They often followed watercourses and are as critical to the survival of the 4-inch western newt as they are to the mountain lion and the deer they pursue. They are also the pathways and trade routes used by Native Americans to sustain their way of life. Here at Midpen, we’re working to reestablish these ancient pathways. They can be wildlife corridors or conservation easements, but the goal is the same: to stitch a fragmented landscape back together so that it can once again fulfill its purpose of sustaining life.

When connections are lost, natural communities become islands and loss of biodiversity soon follows. If you’ve ever visited Hawaii, the Galapagos, or other islands, you may have noticed how few species there are compared to the mainland. These places have a lot to teach us about both evolution and survival in limited and shrinking habitats. World-renowned ecologists Robert MacArthur and E.O. Wilson’s theory of island biogeography or “insular biography” as it is sometimes called, suggests that an island’s size and distance from the mainland determines the abundance of species it supports. The theory can be applied to places that act like islands too. If you look at a map of nature preserves within the highly populated Bay Area, in many instances they are not unlike islands.

This is why many of the bridges we create are land purchases and easements that permanently connect islands of open space to form an intact greenbelt. A great example of this is Midpen’s Highway 17 Safe Passages project aimed at helping to keep the Santa Cruz Mountains from becoming an island. Highway 17, like many others, is a wildlife “sink.” That is, most creatures that try to cross it are killed, and over time they disappear. Midpen and a growing list of partners are working to provide wildlife with safe crossing across Highway 17 to access the food, water, territory and genetically diverse mates needed for the long-term survival of their species.

Other bridges we build are for and between people. The Highway 17 project will also provide passage for people across the highway, connecting neighborhoods, open space and trails. Midpen’s more than 225 miles of trail include many bridges expertly built by our field staff. Another example of a bridge that is less visible but no less critical are those that we build between individuals, cultures and communities around the common goal of land stewardship. For example, though our work to restore the summit of Mount Umunhum, we connected with the Amah Mutsun Tribal Council and soon discovered that our missions are closely aligned. As different as our organizations and organizational cultures are, we can easily share knowledge and values, and stitch together a shared vision for sustainability.

The health of our environment is entirely dependent on human beings’ ability to build physical connections like the bridges, tunnels, swales, fords, and culverts that you see on the preserves and the social, cultural and even spiritual connections to the land. We are, each of us, holding up a small part of the bridge to a stronger, more resilient ecosystem in the future. We thank you for everything you do, every day, to strengthen and inspire connections with nature.