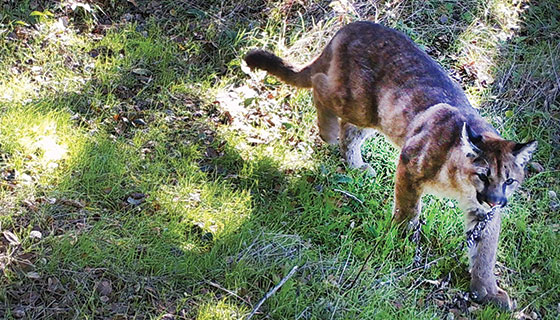 Just before Christmas, a healthy two-year-old female mountain lion in Rancho San Antonio Open Space Preserve received a temporary GPS tracking collar and the name 115F by scientists with the Santa Cruz Puma Project, as part of a new five-year study to learn more about how mountain lions move through and use open space preserves that are also frequently visited by people. The collar works similar to a fitness tracker and allows the mountain lion to move about freely.

“What we are learning from 115F will help Midpen staff make informed, science-based decisions about how we manage the public lands in our care to benefit and protect both visitors and the long-term conservation of mountain lions,” Midpen Biologist Matt Sharp Chaney, who is leading the research project, said.

Rancho San Antonio Preserve is enjoyed by more than 700,000 visitors annually, and like most undeveloped land in the Bay Area, is also prime mountain lion habitat.

“While the big cats are certainly out there, they normally steer clear of people, so most visitors will never even see one,” Midpen Biologist Karine Tokatlian explained. “As rare as observations are, encounters are even more rare and actual attacks extremely rare, though they have happened in our area. This research is aimed at better understanding human-wildlife conflicts so they can be reduced.”

Mountain lions are native to California and play an important role in our local ecosystem by regulating populations of deer, their primary food. Mountain lions are secretive, generally avoid people and are mainly active at night, making them challenging animals to study. They require large home ranges of up to 200-square miles and face many challenges to their long-term survival, primarily due to habitat fragmentation from roads and development that have led to habitat loss, vehicle collisions, rodenticide poisoning and genetic inbreeding due to geographic isolation.

The data received to date from 115F is already helping us understand how she uses the landscape. We plan to expand the collaring study into other popular Midpen preserves that lie near urban areas, including Fremont Older and Picchetti Ranch preserves. 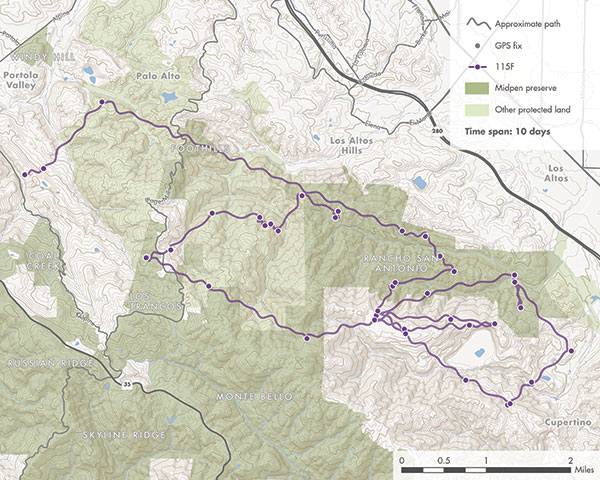 In Rancho San Antonio Preserve, we are also using motion-activated still wildlife cameras to identify trends in the wildlife population and learn how different animals respond to changes in their environment. The cameras are used for wildlife research only and are placed in a grid system used internationally by scientists. Preliminary images confirm the diversity of species that reside throughout this heavily visited preserve including grey fox, bobcat, various birds and rodents. We have also seen a few rare species including red fox (an introduced species) and a native spotted skunk.

Connection is Key to Conservation 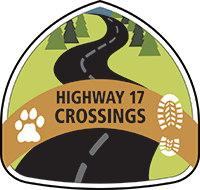 Connecting preserved open space lands so that far-ranging wildlife, such as mountain lions, can safely move across the landscape and avoid people and developed areas is critical to their long-term survival. Midpen is developing a wildlife crossing at Highway 17 near the Town of Los Gatos in a location where data shows many different wildlife species frequently attempt to cross, often unsuccessfully.

This future crossing will connect more than 30,000 acres of protected public lands and is one of several regional efforts to create connections for wildlife between the Santa Cruz Mountains and the Gabilan Range to the south and Diablo Range to the east.

Along with the wildlife crossing, a separate recreational trail crossing will also be developed, linking more than 50 miles of existing regional trails.

Find out more about this project