Midpen purchased the 44-acre, former Almaden Air Force Station atop Mt. Umunhum in 1986 for $260,000. The District’s first general manager, Herb Grench, recommended the acquisition because he thought the mountain-top would make a scenic open space preserve some day. I am pleased to report that 29 years and nearly $6 million later, we are about a year away from opening the summit to the public for the first time.

Our big breakthrough came in 2009 when we received a $3.2 million Congressional appropriation to clean up the decommissioned base by demolishing and recycling 80 structures, eliminating all lead and asbestos and beginning the process to open the site to the general public. Our vision has been for Mt. Umunhum to join the ranks of the Bay Area’s other great publicly-accessible peaks: Mt. Tamalpais, Mt. Diablo, and Mt. Hamilton. We spent the next three years exploring this possibility by visiting similar sites, listening to the public, and thoughtfully distilling all of that information into a plan that includes widening and repaving the 5-mile road to the summit, new staging and parking areas, trails with breathtaking views, a Native American ceremonial space, a spectacular overlook, and three options for the summit area which, for many, will be the “destination”.

In the meantime, staff used all of the congressional funding to complete the cleanup of the summit with one exception – the massive concrete foundation that once supported a 150-foot radar antenna that was designed to detect Soviet bombers at a range of 250 miles, and is locally known as the radar tower or “the cube.” From many locations in the valley, the cube can appear as a small, featureless rectangle on the ridgeline. We have heard some residents passionately describe it as giving them a sense of place, or as a lasting reminder of the Cold War period. Up close, the empty 60-by-60-by-80-foot cube is a massive structure that dwarfs the observer and blocks a substantial part of the 2,000-square mile, 360-degree view, no matter where you stand around its base. The stark contrast between the perception at a distance and the reality up close caused Midpen to stop and consider how to incorporate this remnant of the Cold War, now lacking the context of its original purpose, into the “restored” landscape.

For the purposes of the Site Plan and required Environmental Impact Report, Midpen’s Board decided to consider three options: seal the cube and leave it in place; return the summit to its natural state by removing the cube and re-vegetating the original footprint; or remove the upper levels and leave the first level in place, repurposing it as an interpretive public gathering place. The decision to consider these three options has been a particularly difficult one for an open space district. The public created the District to protect land, to restore it, and to provide ecologically sensitive public access, not to maintain obsolete military structures. 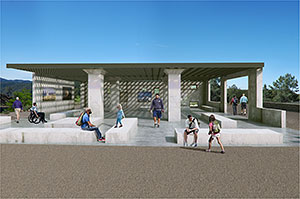 The maintenance of built structures is truly beyond Midpen’s mission. However, a few historical structures, such as Picchetti Winery and the Fremont Older House, have been restored and put back into operation, but only after viable partners stepped forward who were able to fund a significant part of the repairs and take responsibility for long-term maintenance and operations. These partnerships have worked well over the years and have allowed the scale of these facilities to be manageable. The cube is orders of magnitude more difficult to manage because of its remote location, massive size, expense of maintenance, absence of utilities, and proximity to the San Andreas Fault. The summit of Mt. Umumhum is importantly the exact location where the Amah Mutsun band of the Ohlone Indians believe they were created, hence the Ohlone word “Umunhum,” which means the “resting place of the hummingbird.” The hummingbird is an essential figure in their creation story – a story that will be shared at the summit. 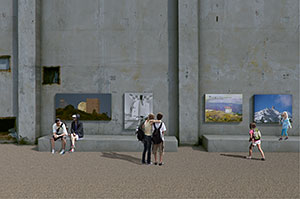 From the outset, the District has been aware that the great arc of history for Mt. Umunhum began with the Ohlones and extends for millennia to modern times when the U.S. Air Force, in 1958, performed extensive site improvements on the peak to install the massive radar antenna and the many supporting structures. We are now on course to open the mountain to the public in October 2016, and later this year, the Board will consider which of the three options makes the most sense for the site and the greater public should insufficient outside funds be generated to fully preserve the entire structure.

In the public discourse about the cube, the perception has been raised that the District intends to demolish the tower and all of its history with it. The fact is that we have worked extensively with both the Amah Mutsun and those interested in the mountain’s recent military history to gather important information, pictures, sentiments, and anecdotes so we can tell the story of the mountain for generations to come, and we have invited participation from as many partners as we can find to be part of this storytelling.

We have been creative in our planning. Rather than an “all or nothing” approach, where either the cube on the mountaintop was left in place or removed, we developed the third alternative, that repurposes the original first floor as an open-air visitor center where the public could get out of the weather, rest, and view the displays that describe all of the historical elements of the mountain while minimizing safety and long-term maintenance issues by removing the upper levels of the tower. Renderings of all three alternatives can be found on this page and on our Mount Umunhum Summit Project page. Whatever the Board of Directors finally decides, that decision will include a comprehensive history of the mountain and input from you. From Mt. Umunhum’s 3,488-foot summit, Midpen is determined to provide an incredible perspective, not only of history, but of our entire region as it unfolds before the viewer. I can’t wait!