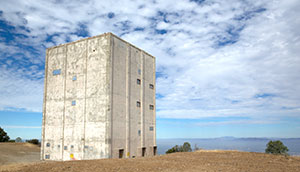 To facilitate safe public access to the Mount Umunhum Summit, the Midpen board of directors voted to retain and seal the former radar tower that sits atop the site. Short-term safety repairs were completed in 2016 to stabilize the structure while the long-term future of the tower was still uncertain.

Following a structural, safety, and hazardous material assessment of the tower, the board approved to move forward on long-term repairs that support the retain and seal option previously approved by the board. The 58-year-old building requires significant repairs to allow for safe access for future maintenance, prevention of unsafe entry from wildlife and people, and to reopen the area around the tower for educational and interpretive opportunities.

The board approved the following project goals in September 2018 to guide the assessment work and the development of recommended repair options:

Beginning in May 17, 2021 through early 2022 the turnaround, drop-off and ADA parking* at the top of the summit and the road leading to this area will be closed to all visitors Monday - Friday during the radar tower repair project.  The East Summit and the final portion of the Mt. Umunhum Trail leading to the east summit, as well as the area around the radar tower will be closed to all access during the duration of the project.

Get complete information on area closures.

Fill out my online form.

Mount Umunhum, is located in the 18,000-acre Sierra Azul Open Space Preserve. At 3,486 feet, it’s one of the highest peaks in the Santa Cruz mountains and features spectacular 360-degree views that extend from the Monterey Peninsula to Mt. Tamalpais, and include much of the Bay Area and even the Sierra Nevada on a clear day. The word “Umunhum” means “resting place of the hummingbird”. The hummingbird is a central figure in the Amah Mutsun creation story.  Including the hummingbird, this peak is home to 63 native plant and animal species.  From 1957 to 1979, the summit was the site of the former Almaden Air Force Station where it served as part of a network of radar stations. In the 1950s, the Air Force graded and flattened the summit of Mount Umunhum to provide room for an early warning radar station. The square concrete structure at the top of the peak served as the support for a large Cold War-era radar sail.

The summit has been closed since 1980 when the base was decommissioned.  In 2009, Midpen received federal funding to clean up the site. Midpen worked with experts to remove old buildings, lead, and asbestos and restore the summit to a more natural condition. Midpen removed 3,000 cubic yards of hazardous materials, including lead paint, asbestos, fuel storage containers and PCB transformers, and deconstructed 13,680 tons on concrete, asphalt, wood and other materials, 97% of which were recycled or reused.

The primary goal of the Mount Umunhum Summit project was to establish a visitor destination that balances public access, enjoyment, and education with environmental restoration. This aligns with two directives of Midpen's Mission: to protect and restore the natural environment, and to provide opportunities for ecologically-sensitive public enjoyment and education. The now opened summit includes new trails, viewing area, and habitat to welcome visitors, wildlife, and native plants back to the peak.