Necessity is Indeed the Mother of Invention

In the Summer 2015 edition of Open Space Views, I wrote about the importance of “supporting our life support system”, which is a good way to characterize our main emphasis here at Midpen. At that time, we were deep into a multiyear drought and I mentioned that we were discussing a pilot “fog harvesting” program to provide supplemental water for wildlife and livestock. With so many local water sources vanishing, we wanted to see if we could tap a heretofore untapped source to provide some relief. Even with the comforting rains we’ve had this winter, we are still moving forward on this novel project and I wanted to give you an update on our progress. 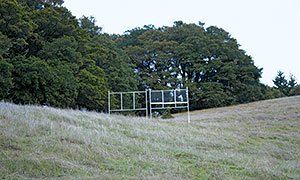 Those of you who have driven Hwy. 280 during the summer have, at one time or another, seen the spectacular fog bank that advances over the Santa Cruz mountains like a gigantic breaker in slow motion. We’ve all walked under Redwoods or Canyon Live Oaks during a foggy summer day and seen the puddles that form beneath them. Fog is a very important component of our local weather and its impact on the ecosystem is profound—as witnessed by the coinciding distribution of the fog and those same forests. The forest trees, acting as fog collectors, can intercept and precipitate an additional ten inches of water during the summer, so it should be possible to collect some of that water when it is most needed and direct it into the ponds we are rehabilitating to serve both wildlife and livestock.

We’ve known for years that fog harvesting has been used to supply drinking water along the western coasts of South America and South Africa and since fog occurs regularly during the summer along the central California Coast, why not try it here? To explore this concept Midpen formed an Innovation Team led by Don MacKessy, Michael Gorman and Grant Kern. After searching the literature, they were encouraged to learn that a one-meter square piece of fabric mesh suspended vertically could generate between one and nine gallons of water on a foggy day. The excitement was building. They soon contacted a researcher with the United States Geological Survey (USGS) in Menlo Park and learned that a great deal of data had been gathered up and down the California Coast relating to the occurrence of fog. Out of this contact came a collaborative agreement between Midpen and USGS to construct and deploy collectors and measure yields at four strategic locations over a two-year period. 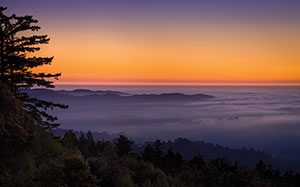 The USGS data made it possible to find the best locations on Midpen land and also provided the opportunity for researchers in other parts of the world to send us a variety of fabrics and coatings to be tested in an effort to maximize yield. With 900 million people worldwide living without safe drinking water, international interest in harvesting fog as a viable way to address this problem is building and we are proud to help in that effort.

By the time you read this article, we will have deployed our test fog collectors. One is visible from the Ipiwa Trail in Skyline Ridge Preserve in a location that will allow the public to see it and read about how it works. Our hope is that we can use this technology to keep our ponds viable longer into the year, particularly because we know drought conditions will return and we want to be ready when that happens. In addition to yields, we want to test the public reaction to the idea. We know that massive nets in the preserves would not be well received, nor should they be. But we do hope that deploying small nets in strategic locations will be effective and palatable to preserve visitors. I have heard a few individuals express their concerns that use of fog collectors might impact the redwood forests by depriving them of water. Thinking about that massive fog bank I mentioned earlier helps allay this concern as the fog collectors we might deploy would redirect an immeasurably small amount of the fog-borne water that is available. We should all enjoy this wet year and prepare for the dry years to come.