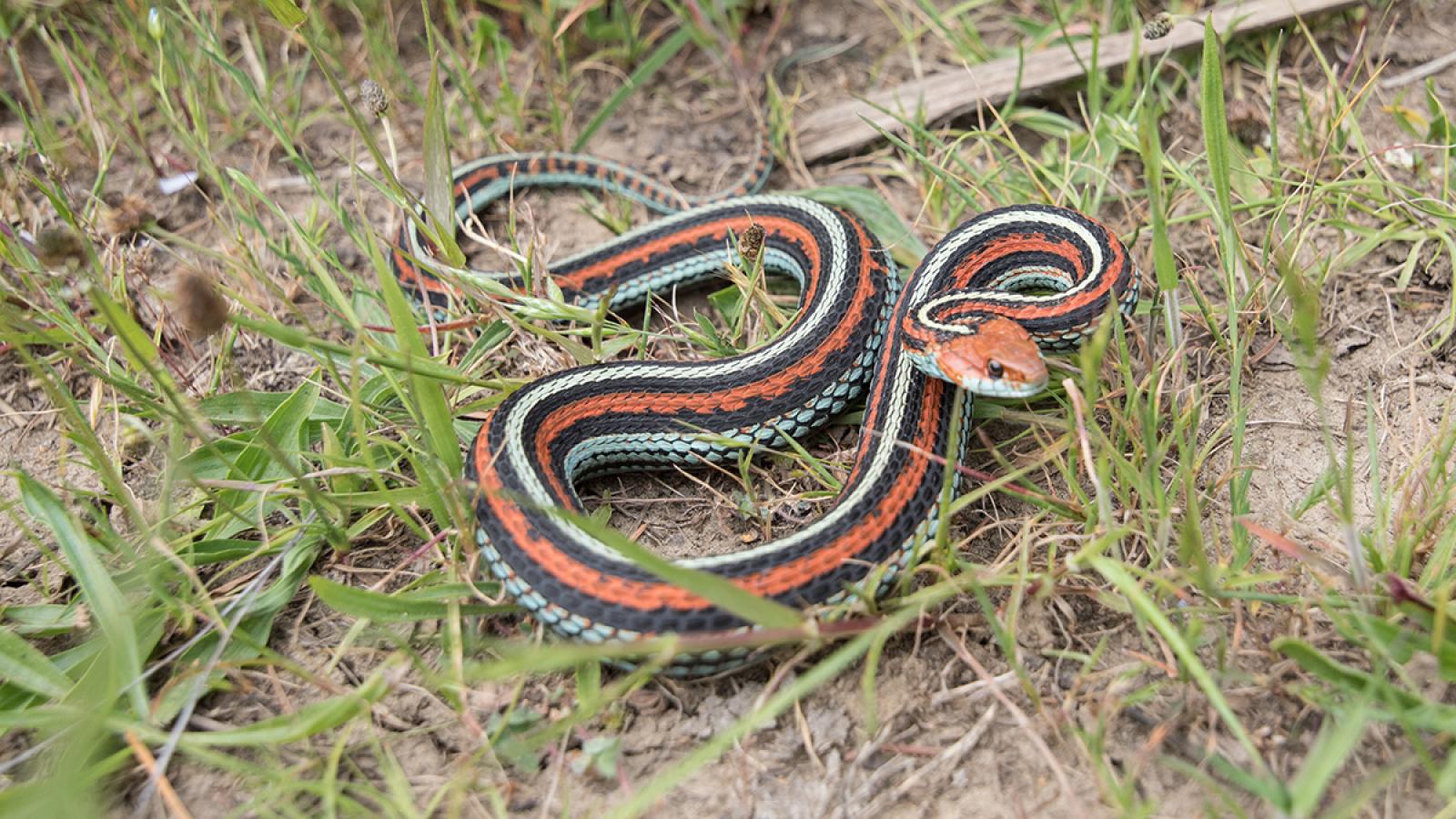 Saving the Most Beautiful Snake in the World

With a rust-red head and bright red and turquoise stripes running down its dark black body, it is clear why the San Francisco garter snake (Thamnophis sirtalis tetrataenia) has been called the most beautiful snake in the world. Despite its name, this dazzling snake lives primarily in San Mateo County, though its historic range stretches from San Francisco to northern Santa Cruz County. Sadly, this reptilian gem is critically endangered, with only a few thousand individuals left in the wild.

Its brilliant colors do more than inspire awe. Amidst the reds, blues and greens of a marsh; the oranges, browns and golds of a grassland; or the iridescent ripples on the surface of a pond, San Francisco garter snakes blend in as they hunt. They eat a wide variety of prey including small mammals, fish, eggs and even highly toxic newts. Ironically for this endangered species, one of its primary prey is the California red-legged frog (Rana draytonii), which is itself a federally listed threatened species.

Both the frogs and snakes require a patchwork of habitats to survive. In winter and spring, the frogs breed in freshwater ponds, marshes and vernal pools. In summer and fall they move upland to areas with grassy vegetation and ample rodent burrows in which they wait out the dry season. As the seasons change, San Francisco garter snakes follow their prey from habitat to habitat.

For San Francisco garter snakes to be removed from the endangered species list, they must reach 10 sustainable breeding populations of over 200 individuals each. Currently, there are only about a half-dozen discrete breeding populations, some of which do not clear that 200-snake threshold.

Cloverdale is a coastal property near the Town of Pescadero, a large portion of which Midpen is considering purchasing from our nonprofit partner, the Peninsula Open Space Trust (POST). This ecological jewel sits right in the middle of a region that harbors populations of San Francisco garter snakes and has the perfect patchwork of habitats to support them: large, intact coastal grasslands and a system of seasonal and year-round ponds and reservoirs.

“We are hopeful that the potential purchase of Cloverdale could assist in the recovery and possible reintroduction of San Francisco garter snakes at other suitable locations throughout their historic range,” Midpen Senior Resource Specialist Julie Andersen said. “We monitor red-legged frog populations throughout Midpen lands, so we know which sites could potentially support San Francisco garter snakes. A reintroduction plan like this would be a long-term project.”

If Midpen acquires Cloverdale, extra-sensitive areas within the property may be set aside in one or more conservation management units with limited public access to ensure that San Francisco garter snakes, California red-legged frogs and other sensitive species can thrive.

Recovery for San Francisco garter snakes can only happen here, on the San Francisco Peninsula. It will take open space organizations like Midpen, POST and others working together with the support of the public to save the most beautiful snake in the world.

Midpen is evaluating the purchase of a large portion of Cloverdale, a remarkable swath of open space and agricultural land on the San Mateo County Coast near Pescadero, from our partners at POST. We are engaging with partners and the public about this potential purchase throughout 2022.