The Hawthorns Area of Windy Hill Open Space Preserve is a 79-acre former estate named for a hawthorn hedge that once lined its boundary. The property was protected from development when it was gifted to the Midpeninsula Regional Open Space District in 2011.

A public process to explore the feasibility of introducing public access to the undeveloped portion of the property is anticipated to begin in 2021. To learn more, visit the Hawthorns Public Access page. 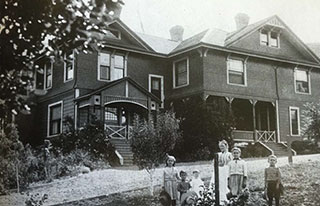 The Hawthorns Historic Complex (historically referred to as “The Hawthorns”) is situated on the southeastern portion of the 79-acre Hawthorn property, which is located between Alpine and Los Trancos Roads in the Town of Portola Valley. The property became a part of Windy Hill Open Space Preserve in 2011, when Midpen acquired the property from the estate of Frederick N. Woods, III. The hilly terrain includes a roughly north-to-south ridgeline that bisects the property through the center. The land to the east side of this ridgeline contains the historic residential and agricultural complex associated with the late 19th and early 20th century development of the site by the Allen and Woods families. Generally, other than a later residence (added in 1952) and an overgrown olive grove, the north and west portions of the property are undeveloped.

In 2014 Midpen completed a Request for Letters of Interest process to identify potential partners to develop and maintain the Hawthorns Historic Complex. There was some initial interest, however currently there are no potential partners. Parties interested in re-use and development of the site and structures should join the Windy Hill Open Space Preserve email list to ensure they are notified of updates. 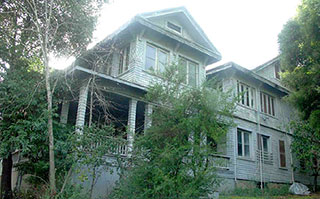 The most notable structure, the Hawthorns House, which forms part of the Historic Complex, is an approximately 9,000 square foot, wood-framed, shingle-style, two-story residence constructed in 1887. Overall, the structure is in fair condition, despite years of abandonment, and holds promise for potential reuse. The Historic Complex represents the social, agricultural and architectural history of an era when many wealthy and prominent San Francisco families owned estate property on the Peninsula both for use as a year round family house and as a summer retreat. For more information regarding the historic qualities of the site and structures, refer to the Historic Resource Study.

In addition to the Hawthorns House, the Historic Complex has three other major structures: the garage, the cottage and the lower barn. Secondary structures include the coachman’s quarters, the upper barn, and the pump house. Of the primary structures, the Hawthorn House and the garage appear to be the best candidates for re-use.

Since taking ownership of the property in 2011, Midpen has focused on implementing site stabilization measures to temporarily halt the deterioration of the historic structures until surveys and reports could be completed to inform the future reuse of the site. These measures have included: installing a security system and sealing window and door openings to prevent trespassing, rodent control, extensive bee hive removal, debris removal, tree trimming, and shrink wrapping the roof to prevent moisture intrusion. These stabilization measures are not intended to be long-term solutions.