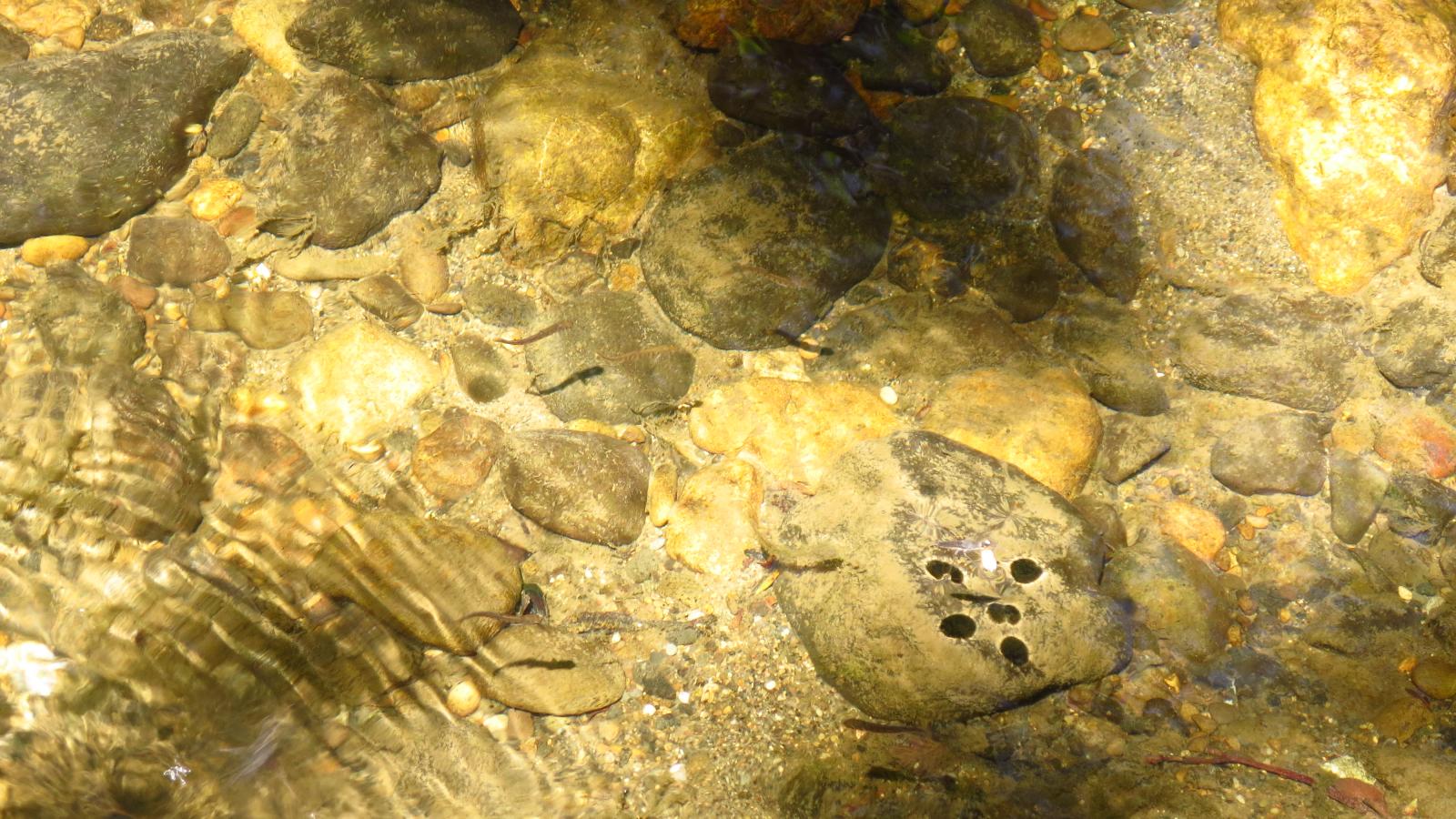 Keeping the water running... with fish! How Midpen is restoring Santa Cruz Mountain waterways for at-risk salmon and trout

Our local Bay Area streams were once teeming with runs of steelhead trout (Oncorhynchus mykiss) and coho salmon (Oncorhynchus kisutch), but today, steelhead trout are threatened and coho salmon are endangered. Both of these salmonid species of fish are anadromous, which means that they are born in freshwater waterways, spend much of their adult lives in the ocean, and then migrate back upstream to spawn and build nests. To spawn successfully, both species need cool coastal streams with unobstructed flow, lots of dissolved oxygen, gravel beds and plenty of large debris.

The amazing lifecycle of the steelhead trout begins in late winter or early spring, when adults migrate from the ocean to freshwater streams and rivers to mate and lay their eggs. The female steelhead will dig a nest, called a redd, in a deep pool in the streambed where there is suitable gravel. After a male fertilizes the eggs, they will hatch out in three to four weeks.

Juvenile steelheads will typically spend a year or two in freshwater, before they migrate toward the ocean. Upon reaching saltier water, the young trout undergo smoltification, a complex series of physiological changes that allow them to adapt to living in salt water. Steelhead can remain at sea for up to three years before returning to freshwater to spawn. These trout can breed and return to the ocean multiple times within their lifetime. Unlike steelheads, coho salmon only make one journey out to sea and one journey back, because they die after spawning. Otherwise, their lifecycles are similar.

Over the years, logging, roadbuilding, mining and other disruptive land uses have eroded the soils, causing fine sediment to wash into waterways. Salmonids are very sensitive to stream sedimentation because the fine silt covers up their redds. Their eggs, which are buried up to three feet deep in the redds, rely on a steady flow of clean, cold water to deliver oxygen. When sediment fills the spaces between cobblestones and gravel, the eggs do not receive enough water flow to survive. Dams, water diversions, urban development and agriculture can cause obstructions that prevent these fish from spawning at all. For this reason, less than half of the watershed tributaries to the San Francisco Bay estuary can still support steelhead trout or coho salmon.

Midpen is in a unique position to protect these charismatic fish, given that much of the land we care for is within the upper headwaters of important watersheds for salmonids. Purisima Creek Redwoods, El Corte de Madera Creek, La Honda Creek and Miramontes Ridge preserves protect, in perpetuity, some of these essential headwaters. This also allows us to assess the sources of sediment in the preserves and do remediation work to prevent that sediment from eroding into the waterways. The El Corte de Madera Watershed Protection Program, which was completed in 2020 after 18 years of remediation work, has shown a 62% reduction in sediment leaving the preserve during winter storms.

Inspired by successful projects in the Pacific Northwest, Midpen anchored strategically placed logs into a half-mile stretch of San Gregorio Creek at La Honda Creek Open Space Preserve. It is a misperception that large debris like this is bad for the health of streams -- for these fish, reintroducing logs to the creek is a matter of survival. Logs create protective eddies where fish can retreat from fast-moving water. They alter the flow of water so that it flushes sediment from gravel. Logs also the create deep, cool scour pools that fish need to survive during droughts. Branches that catch on the larger logs form cover that protects young fish from predators.

This project was supported by our friends at the San Mateo Resource Conservation District (RCD), grants from the California State Coastal Conservancy and Department of Fish and Wildlife (CDFW), and funds from Measure AA, a bond authorization passed by local voters in 2014.

In 2021, our region saw a bad drought immediately followed by heavy rainstorms. During the drought, the pools created by the woody debris provided refuge not only for the salmonids, but for other fish and amphibians (like the endangered California red-legged frog). As the heavy downpours started in fall and winter, we could see the stream morphology changing before our eyes as the high flows added complexity to the stream channel, creating deep scour pools and exposing gravel beds.

Degradation of these watersheds took many decades to happen, and restoration work often takes an equally long time for us to see an effect. However, the installation of these logs has delivered immediate results. “Before, we rarely saw fish here,” Midpen Senior Resource Management Specialist Aaron Hébert said. “Now we’re regularly seeing fish in the newly created pools.”

The possible purchase by Midpen of the Cloverdale Ranch Property on the San Mateo County Coast from our partners at Peninsula Open Space Trust (POST), would allow us to continue the important remediation work that they, and our partners at the San Mateo County Resource Conservation District, have already made great progress on. Both Butano Creek and Gazos Creek, which lie within the Cloverdale property, provide critical habitat for coho salmon and steelhead trout.